Dad Anthony this weekend is cycling from Paul's House to Paris, in memory of his daughter Emily, who passed away when she was seven years old. Here he shares their family's story.

In the early spring of 2016 our daughter Emily fell on her bottom in the playground, the pain just didn’t go away, to the extent that she stopped walking. After a few months she regained her walking and seemed completely recovered, she had been booked in for a bone marrow aspirate test.

The test came back positive for acute lymphoblastic leukaemia. We were devastated. We began the treadmill of horribly traumatic cancer treatment. She faced this in the first instance by fighting tooth and nail against all that was done to her, then gradually she reluctantly and stoically faced it, with good humour and acceptance of most things, it became her new life.

We went through the first and second rounds of treatment. Then, after going on a weekend scout camp with the family, she had a relapse, and ultimately had to go into paediatric intensive care. She now had acute myeloid leukaemia. She nearly died but managed to pull through. Her only hope now being a bone marrow transplant.

We had an amazing summer spending as much time as we could together, making memories. In September she went to Bristol for her bone marrow transplant. Another round of gruelling treatment she faced amazingly well.

In November however she caught a cold. Immune suppressed she fought the virus as best she could, but by February things were getting really bad the cold developed into pneumonia and she had to spend even more time in intensive care with breathing problems. After a week she began to improve but then suddenly it all went wrong, her organs began to fail and two days later heavily sedated here body couldn’t take any more and we had to take the decision to turn off her life support machine.

Three days before she had been designing uniforms for the ward staff. Then began the process of rebuilding our lives and getting used to the hole that she left.

As a family our lives were turned upside down, I am a self-employed coppice worker and teacher, during the first round of treatment I would travel to Southampton each day after work trying to keep my business running on a reduced time frame. Clair lived in the hospital full time with only a day at home. As a mother it was very hard for her to stay away.

Eventually when we arrived in Bristol I had to reduce my work by half so that I could spend time with Emily and give Clair space to have time alone in the room we had at the Ronald McDonald house, as the Young Lives vs Cancer Home from Home was full.

Owen our son, who is three years younger than his sister, had to have his routine maintained as much as possible, so Clair’s parents looked after him much of the time.

Young Lives vs Cancer were brilliant during our time at the hospital especially in Southampton where they took over the process of claiming appropriate government support, helped with fuel expenses and parking at the hospital and generally provided an ear when we needed to talk about issues outside of treatment.

When Emily was too poorly to go home we had several nights at the Home from Home away from the beeps and bleeps and crying children of the children ward, it almost felt like home from home. The Young Lives vs Cancer social worker was a part of the hospital team, so together with the Psychologist, teaching staff and ward staff we felt really looked after.

When your child is going through treatment all the little issues in life become magnified, the support of the Young Lives vs Cancer team was invaluable. The way they worked with the rest of the ward team to ensure that both you and your child were looked after was amazing.

Since Emily’s death my family has raised over £30k for cancer charities, mainly Bloodcancer UK. Several of us have competed in the Blenheim Palace triathlon, my sister does swimming challenges, I do long distance cycling, last year taking part in the chase the sun ride 205 miles from The Isle of Sheppy to Burnham on Sea in Somerset.

It’s my 50th birthday on Monday after we arrive in Paris. So to mark it I wanted to do something special, challenging and a little different and support one of the charities that helped us. I have the perfect motivation. This is an endurance challenge, having seen what Emily endured I have to keep going and I will finish. There may be a tear or two. 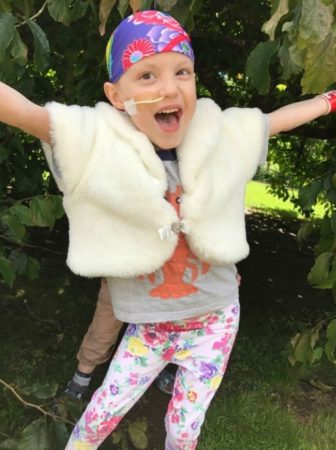