What was meant to be a three-month stay at the Young Lives vs cancer Home from Home in Bristol turned into eight months away from home for Evie and her family. But after the toughest year of their lives, the family are still standing and are finally back together at home in Oxfordshire. Here, Evie’s mum Emma shares their story.

Evie was just four years old and had recently started school when she was diagnosed with Acute Lymphoblastic Leukaemia (ALL) in October 2020. Her parents Emma and Nick noticed she was unwell after she had complained of arm and leg pains. When her dad Nick took her to her first football training session, they noticed Evie was running with difficulty.

“Nick sent me a video of her at her football training and she was running really funny, she wasn’t bending her leg and I just thought ‘oh, somethings wrong with her’. I don’t know if it was instinct but I knew there was something wrong. I ended up googling it and it came up with leukaemia as a result for arm and leg pain, so I had already convinced myself that she had leukaemia,” says Evie’s mum Emma.

“Nick took Evie to the doctors the following day but to be honest she was so well that they weren’t worried, they said to give her some Nurofen and to review her on Friday, but after school on Wednesday she came home and was limping, so I asked her GP to refer us to the local hospital on the Thursday, which they did, luckily.”

Originally it was thought Evie had septic arthritis after a cold she had recently had, but some bloods came back indicating something wasn’t quite right and her parents were told that they were screening her for leukaemia.

Due to the coronavirus, only one parent was allowed to attend the hospital with Evie, so mum Emma received the devastating news of her daughter’s illness alone.

“I’ll never forget it, it was a Friday and only one of us were allowed to be there so it was just me and Evie, they came in and pulled the curtain round and I just thought ‘oh no’, and then they said it was leukaemia. It all moved very quickly after that. I had to tell Nick over the phone and thankfully they let us be together to meet the oncologist. The following Monday Evie was back in hospital to have her Hickman line inserted and to start chemotherapy.”

It was in the first few days that the family were first introduced to their Young Lives vs Cancer social worker, Sarah, who visited them at the hospital.

“It was the last day that they were allowed in the ward, after that they were all switching to remote working because of Covid so we were so lucky to meet her in person, she was fantastic. It was almost like she was our counsellor. She helped us with everything, from work to school and home life, I spoke to her every week in those beginning months.”

Evie was very poorly in the build up to Christmas last year. She had gone through eight weeks of chemotherapy but tests following this showed that the level of leukaemia in her bloods was still too high. The chemotherapy was not working well enough for her and the family were told on the day after Boxing Day that she was going to have to be put on the waiting list for a bone marrow transplant.

“It was pretty scary. You just always think the chemotherapy will work. The large majority of people with ALL will have successful chemotherapy, but there is a small percentage who will need a bone marrow transplant and you really hope you won’t be in that but we actually were.

“It took a few months to process the paperwork and find Evie a match. We were all tested but unfortunately none of us were that perfect match. They found her a 10/10 match, a 21 year old from Germany. Because of Covid they were going to have to donate in Germany and then freeze the bone marrow and get it sent over for Evie. It was really nerve-wrecking waiting as you don’t know whether it’s all going to go to plan but she was finally admitted to Bristol Royal Children’s Hospital on 18th March for her transplant.”

With Evie’s treatment being in Bristol, 100 miles from home, the family had planned to rent a property somewhere so that they could all stay together. During these beginning times of covid siblings were not allowed to stay at CLIC House. However, with Emma having given up work, they were facing financial hardship ahead of them.

“We had stayed in CLIC House in Bristol for a few days previously whilst meeting consultants but we had planned to rent an apartment and bring Millie with us and home school her. But Ann from CLIC House persuaded us to stay there, they knew what we had ahead of us much more than we did, and we would never have been able to home school Millie along with everything. Bristol was so expensive, and renting would have cost us a fortune. With only Nick working, that would have been really crippling for us financially so we are so grateful to have been able to stay at CLIC House.” 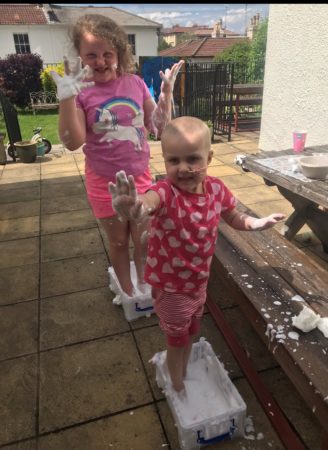 Before her transplant, Evie had to undergo eight days of conditioning treatment which consisted of four days of intense chemotherapy followed by four days of radiotherapy. Following her treatment Evie suffered with bad mucositis, and was in hospital for about six weeks, during which parents Emma and Nick didn’t see their eldest daughter Millie, 8, who was back home in Oxfordshire with her grandparents. “During the time Evie was really unwell, we missed Millie’s birthday. She was going to come down and see us in Bristol but she got a chest infection and couldn’t come down, so that was really tough.”

After six weeks, Evie was allowed out of the hospital and back to the Home from Home in Bristol, where she could see her family and her sister at weekends, However, after just two weeks she was back in hospital with Graft versus host disease (GvHD), a condition that can occur after a transplant in which the donated cells attack the body’s organs, meaning another five weeks in hospital for Evie.

What was due to be just a three month stay in Bristol’s Home from Home turned into an eight-month stay for Evie. Evie’s dad Nick had to return to work after four months, and to be home with Millie, and so for the last few months the family were only seeing each other on the weekends

“Some days were so tough being on your own but the girls at CLIC House were so supportive. Ann, Leanne, Sandra and Sarah were always around for a chat so it was lovely to have that support system there. Evie called them our ‘grown up friends’ as they truly were friends to us.”

Once restrictions eased further having the Home from Home meant that the family could spend some precious time all together.

“That’s what we will be forever grateful for to CLIC, it that it gave us that little bit of family time, time to just be together.”

Emma and Nick were very lucky to have a close knit group of family and friends to lean on during this difficult time, who went above and beyond to support Evie in her battle against cancer. During Evie’s first round of chemotherapy she started to lose her hair, and her family made the decision to shave it off. However, Evie was not alone as all the men in her family took part in a head shave alongside her. Even both of Evie’s Nanny’s dyed their hair pink and purple in support. They raised an amazing £15,000 for Young Lives vs Cancer and the hospital ward that Evie was staying on.

“Evie loved it because everyone had no hair. It was amazing that all the men in our family did it at the same time, so she felt better. Originally, it was so traumatic for us all and at the time you think it’s the worst thing in the world that they will lose their hair but in hindsight it was nothing in comparison.”

“Without the support we received from so many kind people I don’t know how we would have gotten through this last year. Millie’s and Evie’s school have been so supportive and have kept that much needed stability at home for Millie. The treatment and care we have received on Kamran’s ward at Oxford and Starlight ward in Bristol has been incredible. In these recent months we have had daily contact with the team on Ocean Unit. The trust & friendship they have built with Evie and the kindness they have shown to us as a family will never be forgotten”.

Emma credits her families’ positivity that has got them all through this. “We’re very lucky to have our parents, family and friends behind us. People say we’re strong but it’s not a case of being strong, it’s that you don’t have a choice. For us, as a family, there was only ever one outcome; that Evie was going to get well and get better and be okay, so our positive mind-set has to count for something. Evie’s doing well just baby steps in the right direction. Somehow as a family we’re still standing.”